The pressure of the World Championships, thick in the air. Athletes are entering the final stages of preparation, physically, and now ever more, mentally. We will all be wowed by images and footage from the training hall in Anaheim, through the postings on the media of choice, Hookgrip and otherwise… Coaches are sleeping restlessly, though their focus is sharp, confident in the preparation—the test of their successes only after the last, sixth lift hits the platform, in hopes of three white lights. Or, at the very least, two. 6 for 6? And, bragging rights for the ages. A hive of busy bees has descended upon Anaheim, California in the last week and has construct the stage for the strongest in the world to convene—months and months of planning, from the very top all the way down to the very last volunteer. The performance of todays warriors of the United States in plain view on home turf. The weight of the bar primary, but hidden from view on the platform, the future successes of the sport squarely on their shoulders as well. I view them as warriors, plain and simple. Laying the groundwork for the future, and should be marketed as such. The recent Wall Street Journal article suggests the best in decades—the upcoming week will tell. I look forward to my day in Anaheim volunteering in the training hall Wednesday. Sean Waxman noted that I might be in for a day of fireworks from individuals and teams as the last days of heavy training and attempts come to a close. With that one last look, I’ll finally put this exercise to rest, one that has only grown each week through discovery and observation. And, listening. The final focus I do know: Network and Image. Plain and simple. Fail without, succeed with. 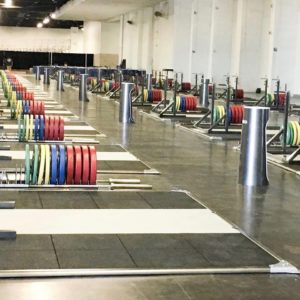 An image of the completed training hall setup showed up on my media feeds last week. Epic, I noted—it gave me pause, and yet again another interesting clear optic to comment. This view is the culmination of what the pinnacle of this sport is all about. Sean Waxman even noted the view from the actual competition platform… Ominous, pride, a certain melancholy, a long ago personal closed chapter. But, only a chapter in Sean’s life story. (This current chapter is a hell-a-lot-of-incredibleness!) When I considered that optic of the training hall to the ideas I am putting forth for scouting and development, the topic and discussion seems a ridiculous pitter patter and dribble in comparison! And, just wait until those 45 platforms in that training hall are in full swing!! Scouting and development in Weightlifting… Who the fuck cares! (To be very blunt! Sorry!) However, it is so interesting to point out the true nature of development and scouting—without it, those platform spots will remain allusively empty for what could have been, should have been individuals. To reference the other side of my coin, in the last weeks, images from Victoria Secret in Shanghai ran across media feeds. Beautiful “supermodels” parading around like peacocks. Same thing. Those girls once were simple teenagers discovered in shopping mall, concerts, walking down the street, and yet, now look at them. And to turn the coin again over for this exercise—look up Waxman’s team members Ali Ludwig and Caitlin Hogan, they were once teenagers as well. Look up their stories and paths. Now look at them! The true nature of a robust developmental program, the scouts job is to keep finding and discovering. Away from the bright lights of the training halls, Shanghai catwalks and competition platforms of the future. Once they have found “the one” they move on to finding the next. Over, and over, and over again. Plain and simple. It all requires a hunger and aggression. Relentless. What may seem like ridiculous pitter patter and dribble, actually is the engine that builds a program. Fiefdoms become a network. Again, to reference my time with Elite Model Management, we invested an unheard of amount of resources, in the quest to find “the one”. “Does she have Greatness?”

A few threads of thought on this treatment of scouting ideals for USA Weightlifting that has been simmering for several months, even years, that deserve mention and saving from the cutting room floor! Through patience, and listening, my views have morphed over these last months—being on the outside of the organization, looking in, but with an interesting optic as noted by mere association with Waxman’s Gym. Many times it is the subtle simple things that can truly design a direction. What about that parent making comments on what can make their lives easy to include Weightlifting as an after school activity? Was anyone listening? How are we going to harness that engine for a youth program at Waxman’s for example, after school? And every WLC in the United States for that matter. How? What is the answer? Don Ricci’s Podcast with Kevin Doherty, which I view as textbook and a must listen for those in youth development in the sport, and homework for anyone that missed this episode—I bet though what may go unnoticed is what was not said. Those kids in the background. Kids being KIDS. The energy is palatable in the air, if one is paying attention… Shortly after Tatiana Kashirina friended me on Facebook, (I feel that day should be a national holiday, btw…) her Instagram feed showing images of her atop the podium next to KIDS, who had just competed in a youth event. Can you imagine the impact on these kids, who knows, perhaps competitors on the world stage of tomorrow for Russia… And just in the last weeks another montage of Russian youth that was Repost by Tatiana… Building the future of the sport in Russia. One training evening at Waxman’s, the most interesting comments about Weightlifting in Texas—the north of the state against the south. The beginnings of a network, but just underutilized and without a clear direction in the big national picture, youth program attempts, ups and downs, but without a path… Recently, Neil Fischbein commenting on a meet calendar in the works in the So Cal region for 2018. Coordination with a large National picture in mind? Nope. (I banged my head against my desk…) I hear of USAW sending “scouts” to certain events. Crickets on any discoveries or the term recruits that has been used, or the process at these events. Mike Gattone and his scouting team should be being marketed as a rockstars in the sport, selfies with perspectives left and right… Suzy Sanchez, come out of hiding! The recent American Open morph to regional events is brilliant, culminating in the national event—a cornerstone to my coming thoughts on the Network concepts. But, these AO regional events trample and cannibalize the local LWC—resulting in lost revenues and what should be a killer strategy top to bottom… Where is the organization? Where is the organization that fosters the fragile LWC? Brilliant Instagram posts of kids doing amazing things, for instance, QLo of Hassle Free, with a 22kg Clean PR goes unnoticed, and Broken Hand Brett (love that name!!)—simple, a repost by USAW costs nothing, these kids heads would explode in excitement and the media would fly from Insta to Snap! Bragging rights! And why is not Sage Landis-Von Jones taking over the USAW Instagram account one day? Where are the hashtags for the youth programs? Choose one youth lift a week, and Repost, those kids will get their lives!! Easy. Costs nothing! Bragging rights! The excitement, the energy. Both flat. (I am banging my head against my desk again…) And lastly, recently I saw what appears to be a template for the 2018 Athletic Development Sites. A brilliant concept, but I notice a flaw—the program is revenue based. The flood gates need to open around the country—I’ll introduce the “Open Call” concept. It costs nothing. Talk about flood gates! Finding Greatness. Developing a culture of discovery.

Network. Image. Plain and simple. Fail without, succeed with.