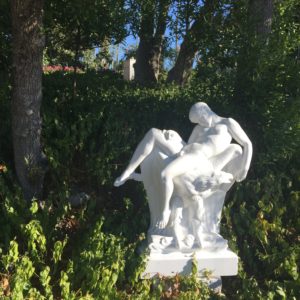 Ah, a Château! It is a rainy evening here in Los Angeles, and I happened upon the images from my last trip up North and my day visit to La Cuesta Encantada, “The Enchanted Hill”. William Randolph Hearst and architect Julia Morgan’s Mediterranean Revival masterpiece, overlooking San Simeon—land as far as the eye can see, the PCH and the Pacific. It is said that Hearst said to Morgan at the initial design meeting, “I would like to build something upon the hill at San Simeon. I get tired of going up there and camping in tents. I’m getting a little too old for that. I’d like to get something that would be a little more comfortable.” Well.

I have been to, also referred, Hearst Castle several times. The first in 2000. I had hired a Harley Davidson in San Fransisco and meandered down Highway 1 stopping in Monterey, Big Sur, and day trip to San Simeon. I was smitten, and from that point forward—if I am up as far as Paso Robles, I’ll pay a visit. What a wonderful drive from Paso on CA-46, through wine country and rolling hills, to Cambria, and finally San Simeon. (The only tour I have not taken to date, is an evening tour—which would be spectacular.) This last trip, I was looking to choose a tour and came across a new option… A semi-private tour for 10! I decided to pony up in anticipation of a closer look in a smaller group. Imagine my delight when I got off the bus at the steps to the Castle—I was the only one with a blue wrist band! My semi-private tour turned in to a private tour one-on-one with guide Jill Urquhart!!! Jill asked what I wanted to see, and I told her, “Let’s just explore as you see fit.” That is what we did. I was allowed to walk off of the tour path in to the actual rooms to see things up close, discussing little known details. (We broke a few rules, but that is between Jill and I!) Jill actually discovered a never noticed nuance—a carved figure of a woman with glass eyes in one of the bungalows. It was thought that there was only one such figure with glass eyes on the property, and right in front of me, she discovered a second! It was just incredible.

With over 250 images captured, here are a few to launch what is sure to be a series…. 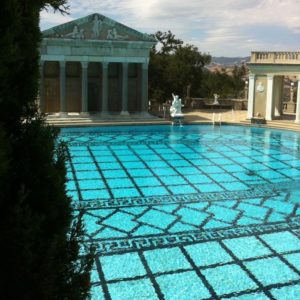 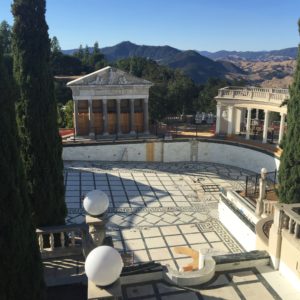 This is the famous Neptune Pool. During this visit, I found the water drained, and the pool under complete restoration. The pool had been leaking and evaporating 5,000 gallons of water a day! (In fact, all of the fountains on the property were bone dry—with the severe drought in California. The pool was drained in 2014.) The pool itself was rebuilt three times, between 1924 and finally deemed finished in 1936. The mistake that they made when they expanded the pool the third time—the concrete was not re-poured for the entire pool, and a seam ran all around the smaller oval, which can be seen in the design. Over time, this seam failed, hence the massive loss of water. One of the reasons for the expansion of the pool, was the addition of the facade of an Ancient Roman temple that Hearst had purchased in Europe. It was felt that the scale of the pool did not suit the Roman Temple facade, so a bigger pool it was! It was also discovered, the marble panels of the pool were completely disintegrating throughout.  The new marble is coming from the same mines that produced the original marble between 1924-1934. True restoration. Fascinating. 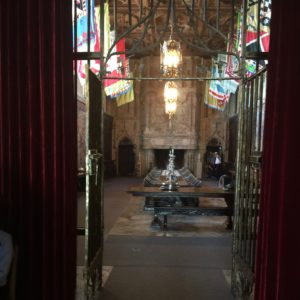 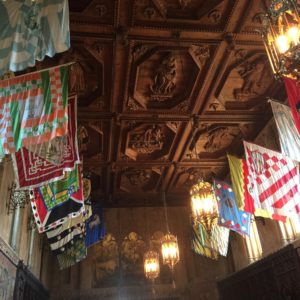 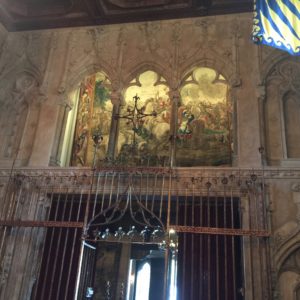 This is a look in to the Dining Room and ceiling. Noted is the musicians loft at one of the ends of the room, where one can see the tapestry hanging. Jill is pointing to the discovery of original stone work, up in the loft—which were then copied to complete the details throughout the length of this room and others on the estate. The musicians loft is up a level, and reachable through a small passage. (It was said that the kids would hide up there and watch the goings on below!) It was fascinating on one of the upper levels, the study of reliefs to determine which were the original pieces which made up a border—they are still trying to find the original! Details. Details.

…a random stroll through “The Enchanted Hill”.  La Cuesta Encantada.